"Fast but weak"
―How to Play

Sprinters are the weakest and fastest zombie in SAS: Zombie Assault 3. Their commonness combined with their speed is their greatest advantage. They will often come into the players' view quickly, and from different directions to flank the player. Their speed also makes it difficult to escape them.

A player running while turning or changing direction often gives Sprinters a window of opportunity to land hits. While their hits aren't very powerful, they attack quite rapidly. They also possess the ability to hit the player through barricades if a player is too close, forcing players to back away and either shoot them or let them break in. Sprinters also strafe from side to side as they run, and sometimes take odd paths players don't expect them to, making them very difficult to hit at times. When spawning, Sprinters let out a high-pitched hissing sound.

In the mobile version of Zombie Assault 3, there is also red-tinted and green-tinted Sprinters, which are stronger than regular ones.

In Tower Defense, there is a stronger version of the Sprinter. It is called 'Runner V2' in the game files. 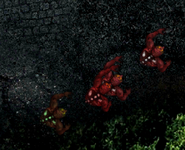 Two Sprinters, followed by a red-tinted and then a green-tinted Sprinter