If left unchecked, Skeletons can be spawned in large numbers and overwhelm the player. Skeletons have very little health, though they can overwhelm with the mass amounts that can be produced. The best way to kill them is with grenades, or fast shooting weapons such as sub-machine guns and assault rifles.

A Devastator with Skeletons (SAS:ZA3). 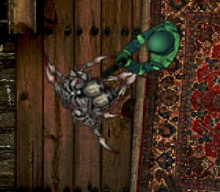 Skeleton in the mobile version of SAS:ZA3.
Community content is available under CC-BY-SA unless otherwise noted.
Advertisement