On a blog published on May 16th, 2014, it was announced that a mobile port of SAS 4 was "a long way into development."[3] Regardless, it was later released in October that year.[4]

It was released on Steam on 16 October 2017, and it is a port of the mobile version. Alloy is absent, and so is Crafting. There are no championships and Boreas, as well as Meltdown and Ice Station aren't there.

Zombie Assault 4 was said to be in early development on a Ninja Kiwi blog on January 22nd, 2014.[5] On a blog published on February 28th, an image of the title screen was put on Imgur, and put on the blog as a 'hidden' link in the response to the question "Is it possible to share some spoilers for new games?".[6]

Another 'hidden' link to a file on Imgur was included in a blog from March 14th, 2014 in response to a question.[7] This time it was a GIF animation of a few seconds of gameplay - a soldier shooting zombies inside a building, while a timer above counts down. It was seen here that turrets, Premium Ammo, and Grenades and Cryo Grenades would be included.

In the year 3104, aboard the Kurios Space Control Station in Thera System, an unknown virus has infected most, if not, all humans. At Bay 10, Military Space Shuttle Mantis 12 is unable to leave due to malfunctioning ramps. As a result a team of SAS forces begins to defend the rear of the shuttle. Eventually, the SAS manages to takeoff, but not before being attack by a mutated boss zombie, which in-game, changes depending on your character level. When the SAS finishes clearing the shuttle, it departs.

Meanwhile, upon hearing of the news about the virus, dubbed the Thera Virus, the president begins to address worried citizens that all will be taken care of. While on TV, an intelligence officer orders the same SAS team from the Aartis system to recover a vaccine on Thera discovered by Combot, an AI designed for emergency defense, in order to stop an outbreak on Aartis, one of the known planets where the human race resides. Since the president's address to the people, he has also approved of signaling the Jolt Ship in Thera's orbit to fire its WMD to destroy the entire planet, since there were no signs of life at the time. The team has only less than 15 minutes to retrieve the vaccine and get out alive before they are destroyed along with Thera. The team of SAS fights their way through a subway station to reach a train, which leads to a lab containing the Vaccine. Once they retrieve the Vaccine, the team manages to shoot their way through a crowded street filled with all sorts of zombies, including another mutated boss zombie(s).

After retrieving the vaccine, the SAS Team boards a dropship and departs. A few moments after the SAS Team departs, the Jolt Ship destroyed the planet, killing all the zombies on it. Combot then orders the team back to Aartis System since the virus has reached a heavily populated planet of Aartis. There, citizens have barricaded themselves in, but they won't last long with the hordes of zombies abound. The SAS are then ordered by ComBot to rescue as many survivors as possible and neutralize any zombies in the area, including survivors who become infected. After rescuing any survivors in the area, the SAS are attacked by another boss zombie.

Upon rescuing civilians, the SAS team are soon briefed about Combot suddenly becoming compromised as the Virus has become a digital pathogen. The SAS arrives at a market area as there are pods that seems to be harvesting humans and mechanical parts, all of which contain either zombies or drops. While fighting through the area, the SAS discovers a Purge nest spawning zombies. When they reach the other parking lot, the SAS discover a Minion Egg. Four minion eggs surround a much larger boss egg, and each minion egg releases a large group of powerful zombies when destroyed. When the SAS Team approach the Boss Egg, spikes emerge from the ground beneath their feet in an attempt to impale the SAS Team. After destroying the Boss Egg, a Boss Zombie emerges, which is dispatched by the SAS team.

Soon, the SAS are guided to a mansion overrun by zombies with a VIP inside. After searching various hiding spots in the mansion, they finally locate the VIP. He is quite whiny as he will call out the SAS team for picking up a droppable item he claims belongs to himself. Eventually reaching the landing zone, the SAS and the VIP notice that Zombdroid Servants and Zombdroid Soldiers are attacking the group. If the SAS manages to hold off the Zombdroids, the VIP will say in relief to get out of there. If the SAS manages to hold off the attack, but the VIP's health is half-way down, the VIP will complain how he is "half-dead".

The SAS are then sent on a mission to a hospital without power. The only way to restore its power was through switches throughout underground tunnels. The SAS go through the zombie-infested tunnels and turned on the power, but Combot activated four Zombie Turrets and, later, one or more Loaderbots. The SAS must battle these enemies to complete their mission.

Later, the SAS are sent to a city that was partially barricaded. Remaining survivors of Aartis are awaiting extraction, but zombies are swarming too quickly to set up barricades. The SAS must defend the city from zombies swarming in from the places without barricades. The mission consists of eight waves, each one increasing in difficulty. The SAS cannot let more than 25 zombies through the lines of defense. There is a final boss at the end.

Afterwards, the SAS are sent to Boreas to investigate why communications were lost at the ice station. They are greeted by some HVM mercenaries who helped defend the recovery station. After defending from a few waves of zombies, the HVM soldiers destroy the ambulance the infected refugees have been placed into. A fight breaks out and after the HVM mercenaries are defeated, the facility is overrun, forcing the player to escape in a truck. The player defends the truck from attacking hordes of zombies, but it is hit by an avalanche, killing the driver and forcing the player to fight a final boss alone on foot.

The next mission continues on Boreas. The SAS soldiers see thermal heating coming from Boreas' nuclear plant and are forced to shut down the nuclear vents. After a reactor is shut down, the countdown resets to five minutes before the next nuclear reactor starts its countdown. After all three are deactivated, the character goes to the main computer to shut down the system resulting in pitch black for a couple of seconds. When the lights turn back on, the player is greeted by multiple bosses instead of one or two bosses, plus a horde of zombies.

There are three character classes, each with their own unique skills, 75 weapons with 11 unique augmentations, and 57 body armor pieces with 13 different augmentations. All of the armor pieces and weapons are obtained by strongboxes, which are obtained in several ways. There are total of 12 industries that make weapons and armors. Like with Zombie Assault 3, 4-player co-op multiplayer is included. Chat is included in multiplayer. Also, the players can now play multiplayer without having a full-room. Passive upgrades on weapons, armor, grenades, and turrets (called Masteries) were also introduced to the game by the 8th October patch.

The style of gameplay in Zombie Assault 4 differs from 3: rather than the player defending themselves from waves of zombies on a map, the player progress through maps in level-like fashion with objectives to complete.

In SAS: Zombie Assault 4, you are allowed to have two different character slots open, until one of them reaches level 20, unlocking a third slot. Another slot is unlocked when a character reaches level 60. You also have the option to purchase a fifth and sixth slot for 20 NK Coins.

When creating a character, you can choose between the Assault, Medic, and Heavy classes, from left to right. The description for each is as followed:

When first creating a character, you receive 2000 SAS cash to purchase gun augments, turrets, or grenades. You receive a strongbox each time you level up, giving you either new gear or a new weapon. You also receive more cash. Another difference is that players now collide with zombies and can't run through them. This may sound benign, but actually fundamentally changes the game, making the actual zombie fighting more skill-based, and also makes the game more tactical.

Connections to the Alien franchise

Like previous games in the SAS: Zombie Assault series, SAS 4 seems to include references to the Alien franchise. The Loaderbots are very similar to the Loaders from Aliens, and the idea of the Zombie Pods mission (humans being harvested into pods) seems to be another reference to Aliens, where colonists are taken by the Xenomorphs and put into cocoons to become hosts for more of the Xenomorphs.

The first line of the briefing for the mission Ice Station - "We have lost contact with the mining colony on Boreas" - also contains a reference to the movie Aliens. The colonial marines are sent to investigate why contact with the colonists on LV-426 has been lost. Also the theme of humans living on planets other than Earth, and even space stations, from the Alien franchise is prevalent in SAS 4 with each of the different planets (and the one space station) that humans are said to live on.

Additionally, the idea for the Acid Blood zombie modifier could have come from the Xenomorphs, which have acid blood that is deadly to attackers, and the M45/M48 UHE Fragmentation Grenades seem to be a reference to the M40 HEDP Grenades from Aliens. Both the SAS: Zombie Assault series and the sequels to Alien also feature furturustic weapons, including the M41-A Grendel 12.7 from SAS 3 (which is very similar to the assault rifle used by the marines in Aliens) and the Ronson WP Flamethrower in SAS 4 (a flamethrower is used by one of the marines and later Ellen Ripley in Aliens as well as by Ripley in Alien Ressurection). 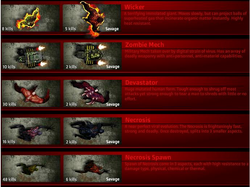