The Ruin is a boss zombie exclusive to SAS Zombie Assault Tower Defense. It has the appearance of a gigantic flaming demon and is the toughest enemy in the game. Not surprisingly, it can withstand most defenses, demolish them in turn very quickly, and is extremely durable, to the point where not even a Necro Nuke can kill it in 1 shot.

Despite the fact that the zombie is not named in the game, it has been referred to by the developers as "Ruin".[1] However, internally, it is simply called 'Boss'.

The Ruin will increasingly spawn in Freeplay mode after killing it in the final required wave of whichever map the player is playing on. When killed, the Ruin lets out a defeated growl. 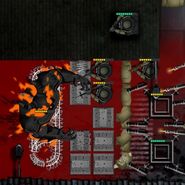