The Radar Scanner displays a miniature map of the current area. In SAS, SAS 2, and Insane Asylum, it appears in the bottom-right corner of the screen, whereas in SAS 3 it is in the top-right of the screen. It shows where Zombies, Power-ups, Barricades, and the player are. In SAS 3 it will show where obstacles and other players are (in Multi-Player). 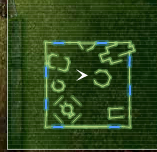 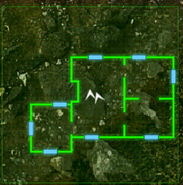