For the game mode of the same name on SAS 3, see Nightmare Mode (SAS3).

Nightmare Mode is a multiplayer-exclusive mode introduced to around the beginning of February 2015.[1] It costs one Nightmare ticket to play. You have five tickets per day, which are replenished everyday at 0:00 server time, which is UTC. There are also Premium Tickets which can either be bought with the Nightmare Veteran's Pack or after you run out of Daily tickets. Unlike regular Daily tickets, Premium tickets never expire.

Zombies are much tougher, and each map is individually redesigned. In addition, Nightmarish zombies exist, which are much larger than normal, and have the Nightmarish buff, which heavily increases their health, size, and damage, as well as 75% resistances to all types of damage. (They also have red labels when moused over.) Even a group of players at lower levels may meet bosses such as Nightmarish Savage Devastators or a swarm of Nightmarish Elite Necrosis, which can often lead to the death of lower leveled levels due to them not having tough enough equipment due to their levels and due to the bosses having all these Nightmarish buffs.

Nightmarish zombies have 10x health and 10x damage, are larger than normal, and have the following buffs:

As you can see, these zombies have all of the resistances. All of the buffs on a regular Nightmarish zombie are listed to refresh your memory. This fact makes having at least level 8 Adaptive on your weapons, regardless of their damage type, a must if you are to play nightmare mode without spending extreme amounts of time on a nightmare zombie. Deadly and Overclocked are equally important, so don't forget those, either.

Nightmarish enemies, however, do not come with Regenerating, Dark Minion, or Acid Blood. Nightmarish bosses can only come with Dark Minion, Extra Strong, Berserk, or Extra Fast, like with regular bosses, but they lack the 10x health, 10x damage boost, and multiple resistance like regular Nightmarish zombies do. They do have a massive damage boost, however, with even a Savage Regurgitator being able to one hit stronger players.

Every time a boss fight is won, one Savage boss that is defeated will drop five SAS4 cash packs and three strongboxes. The amount of the cash depends on how difficult the boss was. Nightmarish Savage Regurgitators will drop no more than $10k per stack while Nightmare Savage Necrosis will drop no less than $100k per cash stack. All regular bosses killed won't drop massive loots, but they will drop a single low quality strongbox or cash pack depending on the player's rank rather than the boss' difficulty. Since the October 5th update, all Nightmarish bosses will also drop alloy, with the amount depending on the boss difficulty.

Initially in mobile, anything savage would drop 3-4 cash drops and a strongbox, particularly savage Z-Droids, making Power Out and VIP incredibly overpowered, allowing for 30+ boxes in a single game. This however, has been patched.

Nightmare will spawn extra bosses in the middle of the mission, as well as at the end as usual. Boss type is determined by roughly total player levels*2 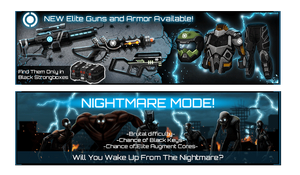 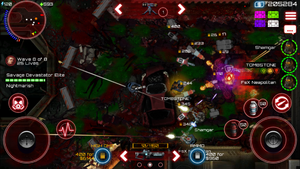 A fight on last stand nightmare mode against a nightmarish savage devastator eilte.