Meltdown is a mission that was added to SAS: Zombie Assault 4 on February 11, 2015. It is the 9th mission, unlocked at level 14, and along the map Ice Station, is currently available only on the PC version. The map takes place on Boreas, where the Trans-Federation says they lost communication with the nuclear power plant here, and it's time to check it out and shut it down.

In comparison to the earlier missions, Meltdown is overall a very difficult mission as you have to wander through small corridors with doors that open and close randomly depending on how many zombies are in that corridor or room at the time. Heavy yet powerful and long-lasting weapons such as LMGs and Flamethrowers, or fast-reloading weapons such as 1887 Shockfield are recommended for this mission as you are likely to get cornered many times trying to find the reactors and during the boss fight. Some weapons with specialties such as the Shredder, as it will bounce many times on wall to hit enemy multiple times if shot at right angle, and arc weapons, as the doors can be shot at and arc to the other side, will also work very well. Semi-automatic weapons and slower firing ones such as sniper rifles and pistols will most likely result in the player being overwhelmed by a horde and killed.

Adding to the difficulty, you are given only five minutes to find each of the three reactors AND shut them down, as well as having to move quickly through rooms that will fill with radioactive gas. Additionally, you should avoid the green medkits located near the reactors, as they deal massive damage to the player if picked up (and using the Die Another Day skill doesn't mitigate the effects of them either). After this, you must return to the computer and restart the power plant, which will also trigger the boss fight in the process.

The best way to avoid the gas rooms is to pay attention to the doors. Gas room doors will close frequently in an attempt to trap players. Exit those rooms as soon as you notice them before the doors can shut on you, and find another way around.

In the end, a large number of bosses may spawn, such as a Devastator, Wicker, and multiple Regurgitator bosses. To have the best chance at winning the boss fight, it is recommended you circle the building and mow down the horde plus any weaker bosses that may appear (such as Regurgitators) before focusing on the stronger ones. 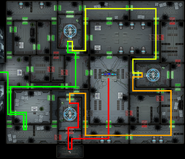 Quickest way to finish the mission whilst going through all loot rooms. 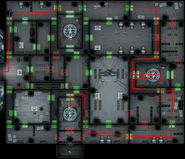 A map of Meltdown with a marked path that shows the quickest way to finish the mission, while avoiding all of the gas chambers. 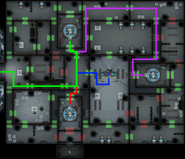 Another way to do it. This seems to be the most efficient way, just go back through all the path to reach all reactors and Central room.
Community content is available under CC-BY-SA unless otherwise noted.
Advertisement