The Mamushka is a special type Zombie that made its first appearance in SAS: Zombie Assault 3, dubbed "Splitters". If a single Mamushka with all of its forms down to the last form hits you, you are dead or very close to death.

The Mamushka is fairly rare on the battlefield for low levels (higher levels find them everywhere) when compared to other special Zombies. When a Mamushka is seemingly killed, it spawns two more smaller Mamushkas (similar to the Butcher leaving five smaller parasites) and when one of those Mamushkas are killed they, like their original, spawn another even smaller Mamushka to the annoyance to the player.

In SAS Zombie Assault Tower Defense, the Mamushka appears on Wave 17. It has three stages in Normal difficulty and four stages in both Elite and Nightmare difficulty. 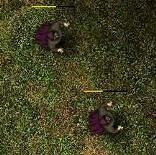 A frozen Mamushka.
Community content is available under CC-BY-SA unless otherwise noted.
Advertisement