The M2 Flamethrower is a premium gun.

The Flamethrower is a premium special-ammo weapon that is unlocked at Rank 20 along with the CAW and M41-A Grendel. It costs 30 NK Coins ($2.99 on the iOS/Android version). Ammunition for this weapon costs $500 ($1500 for premium)  for 40 "rounds". This gun is perfect for Purge mode (Normal and Nightmare mode), as it burns nests causing major pain over time. This is a good weapon for hit-and-run against Devastators too, and this weapon is also very good if starting to play in Nightmare mode. Another reason to get this gun is the flame width, you can have multiple Zombies burning at once, and when added up with the constant rate of fire this has got to be one of the most devastating weapons in the game. In Apocalypse mode this is a surefire way to rack up tons of kills as all you have to do is point at those hordes of flesh eaters and fire. Though the premium ammo is expensive, it is worth it if you can afford it as it increases the damage done by 30%. When paired with the Sharpshooter and Officer perk, it can do devastating amounts of damage and completely destroy even the biggest hordes of zombies. This has got to be the single most badass gun in the game; it takes out spawn nests in seconds! A must buy if you have the coins. The damage will stack the longer you hold it on a zombie. You can save a ton of money by just clicking it to shoot one flame at a time. The ammo price isn't very cheap though...

One main difference from its real life counterpart is that if a zombie takes a swipe at you from behind, the napalm tanks where your "ammo" is stored won't explode, as that was the case with some flamethrowers. Physically, it seems the Flamethrower is missing the hose connecting the gun proper to the tanks, but it could be due to graphic limitations.

The downsides to this weapon are few, though severe. It has 100 ammo, though this can be used up very quickly in stressful situations and when you have many zombies such as in Apocalypse mode this can kill you very fast. In such, you have to have a good team to cover you while you are reloading otherwise this can mean certain death. The other major downfall to this weapon is the reason why this is such a great weapon, after burn. The afterburn on some enemy can be crucial to killing them, but unless you have perks and premium ammo, doing a simple burst of flame can not be enough to kill them. You can kill up to a Butcher zombie with one flame of regular flame (without perks), and with premium flame (without perks), you can kill up to a devastator with one burst.

This weapon will damage zombies relevant to their health instead of fixed value like all other weapons do, making this perfect to take out devastator in seconds.

After (one flame no perk/premium) 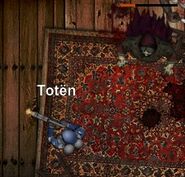