). The normal grenade (M45) you use under level 30, they have a base damage of 650. At level 30 all of the M45 grenades in your inventory automatically upgrade to their red counterparts, the M48 UHE (Ultra High Explosive) grenades. They deal a base damage of 2,100. Both grenades spawn from your character thrown 2 meters in the direction you're facing and spawn as fast as you press the button for them. Both grenades also have 10 pierce (found by ZX840, thanks mate!).

Variations include the Cryo Grenade and the Holy Hand Grenade (SAS:2-3).

For more info on the SAS:4 grenades, click here!

The grenade icon in SAS 3. 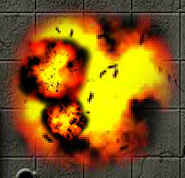 A grenade exploding in SAS 2.

A grenade exploding in SAS 3. 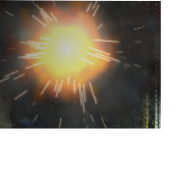 A grenade exploding in SAS 4.