The Farmhouse is the first available map in SAS: Zombie Assault 3, and is the only map to give a bonus 40% to total XP.

The Farmhouse is the smallest available map in SAS: Zombie Assault 3, and is also one of the hardest (the reason for its large 40% XP bonus). It is made of four small rooms; a living room, a possible dining room, a bedroom, and a barn reminiscent of the Courtyard from SAS: Zombie Assault 2 Insane Asylum. The house is bloody, abandoned, and the remains of its former tenant and his final message can be found in the bedroom in the top-right. The map contains a total of eight barricades.

Because of the small size of the house, it can be easy to become cornered. Without heavy firepower, the barn is probably the worst area to stay, due to its multiple flanks and one exit. To survive, a good strategy may be to constantly move through the three other rooms once zombies begin breaking through en masse. Constantly moving through the three rooms will force zombies into a circle, making them easier to pick off.

A shotgun may be the best choice for the map due to the close grouping of zombies. However, because of how easily zombies may catch up to the player, a submachine gun or another weapon with better mobility is also recommended. Heavier weapons such as machine guns are not recommended because of the long reload times and slow movement speed.

If you have an organized group, another quite effective strategy is to keep boarding all barricades to keep zombies out (with the exception of Shadows). 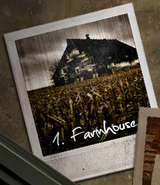 Picture of the Farmhouse, as seen at the map selection area.
Community content is available under CC-BY-SA unless otherwise noted.
Advertisement