Devastators, in all games they have appeared in, are upper-echelon zombies which have devastating attack power on players. They are large and incredibly bulky, with red eyes and pinkish tissue with a spine that seems to protrude from their bodies. They all have very high health, making them difficult to defeat.

"Was this ever human? Summons skeletons, pounds the ground to damage all nearby players, or just punches you in the face."
―How to Play

The Devastators are the strongest and rarest type of zombie in SAS: Zombie Assault 3. It is easily one of the most threatening zombies seen in the field due to its variety of attacks and its large health pool. It can even destroy barricades with one hit, and can kill a player with only a few punches. However, it only has moderate speed and its large size makes it easy to hit at range, allowing players to keep their distance while still effectively damaging it. When killed, the Devastator lets out a high-pitched scream and a low pitched growl simultaneously.

As with other zombies in the mobile version of Zombie Assault 3, there is also a stronger green and stronger red variant. The Skeletons that they spawn will also be green or red respectively.

Note: The Devastator must stop moving to do each of its attacks.

Note #2: An issue is caused in which, apparently due to lagging or slowing of a computer due to frame-rate issues, when one dies with the focus of the Devastator upon them, the Devastator stops, often uses their 'fist-slam', and causes damage to the already-dead player. While this appears to reset the respawn timer, it seems to cut the timer in half or shorten it to however long one was to wait before the 'fist-slam' occurred; it may happen up to four times in the rarest. However, it will not occur often enough to entirely interrupt a respawn.

In SAS Zombie Assault TD, the Devastator appears on Round 25. It summons a group of skeletons that attack towers, creates a green aura that damages anything in its range and attacks towers as well. It is the second strongest zombie in the game, but it does the most damage. It can destroy towers (that don't have the Armour Upgrade) and even Jersey Barriers in one single punch. Like the Ruin, even if only one Devastator passes the exit, all lives are lost.

"Huge mutated human form. Tough enough to shrug off most attacks yet strong enough to tear a man to shreds with little or no effort."
―Official Description

Another change in SAS Zombie Assault 4 is that the Devastator enrages when it is has low health (below 2 bars). Occasionally, the Devastator will enrage with 3 health bars. When it enrages, it opens its arms wide (like the Devastator in SAS 3 when summoning skeletons), roars and a red aura surrounds it. An enraged Devastator moves and attacks faster than normal and resists every damage type. Additionally, Devastators look different on SAS 4, as they have no skin and also appear to be of a comparable size to the Ruin of SAS TD infamy.

When killed, the Devastator lets out a high pitched scream and the red aura around it fades.

Description of a Devastator

The Devastator in SAS4 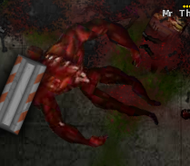 A living devastator in SAS4

A Savage Devastator in Nightmare Mode

A Savage Devastator in Nightmare Mode at less than 25% health
Community content is available under CC-BY-SA unless otherwise noted.
Advertisement