The Cemetery is a large open map, and is unlocked after the player completes the Institute. However, it must first be downloaded before being played.

The map is somewhere in between the difficulty of Zomb-o-Mart and Black Isle. The only difference is that players have more room to defend rather than being confined to cramped entryways like the Institute. The center of the map is the easiest to defend, so long as they have the ammo to hold it off. Otherwise, the pathways might be defensible enough against Shadows, but not Burrowers. 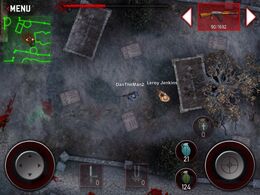 Layout of the map Cemetery during wave 2
Community content is available under CC-BY-SA unless otherwise noted.
Advertisement