version of it was depicted, along with the Rancor Sadeye, on the February 3rd, 2015 update banner of SAS 4. It fires gloops of acid, staying on the ground much like a spitter's bile, doing massive damage over time. Long before implementation, its image could be found in the game's SWF file via a flash decompiler.

The CM X-1 Furie is the third Championship-only weapon in the game (following the RIA Trident and HIKS M1000), as well as the third

Chemical weapon. It was first available as a reward in the October 30th 2015 Lone Wolf Championship.

The update banner featuring the weapons 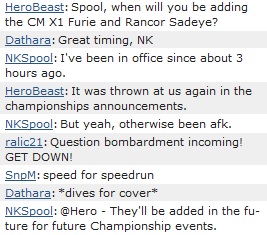 Spool announcing the future appearance of the Furie and Sadeye.
Add a photo to this gallery
Retrieved from "https://saszombieassault.fandom.com/wiki/CM_X-1_Furie?oldid=122511"
Community content is available under CC-BY-SA unless otherwise noted.