The Burrower is a Zombie in SAS: Zombie Assault 3. It can notably travel underground. The Burrower has the appearance of a green slug, and leaves an acid trail (when moving and killed) when traveling above-ground.

It also has a larger, darker green variant, as well as a stronger variant that is larger and is red; this version seems to have more range compared with its smaller green cousin. The Burrower and its variants only appear in the mobile version of SAS 3.

Note: They will only move in if you get close (or stand still long enough) after they show up on the surface giving you time to shoot them before they have a chance to leave a trail of acid or attack. 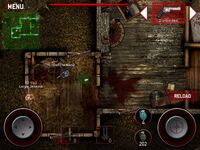 A Burrower in its attack stance