"Contains a revolting, wriggly surprise"
―SAS 3 How To Play

As with other zombies in the mobile version of Zombie Assault 3, the Butcher has a stronger green and stronger red variant. When they die, the parasites released will also be green or red.

In Zombie Assault 4, Butchers make a return, however, they're called Bloaters (like in the mobile version of SAS 3 and SAS TD). In addition to its regular form, it also has three stronger forms: Fetid, Evolved, and Apex. The parasites it releases upon death look more like slugs as opposed to worms in the other games.

"Bloaters move slowly - as their muscle fibers are flooded with a sticky mass containing bile, tallow, and adrenaline. They act as hosts for other mutations, which appear on larval form on death."
―Official Description

The same enemy as butchers, but are called Bloaters in this installment of the series. They are one of the toughest normal zombies to face in SAS:4, as well being some of the most lethal, dealing near one hit levels of damage on the evolution above it's base form, even without the Dark Minion status. These bloaters are the biggest threat to those who don't have good armor or are getting cornered, and even once killed their worms can block your weapon's pierce when being cornered.

The Butcher in SAS 2.

A dead Butcher in SAS 2.

The 'wriggly surprise' in Insane Asylum.

The 'wriggly surprise' in SAS 3.

The gory remains of a dead Butcher.

A Fetid Bloater in SAS 4 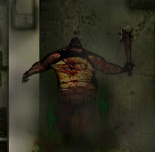