The Airbase is the second map unlocked in SAS: Zombie Assault 3. It is larger than the Farmhouse and rewards a bonus 20% to total XP earned.

The actual name of the map is a bit of a misnomer, since it's really a car parking lot instead of an actual air base.

The primary obstacles in the airbase are the remains of abandoned and crashed vehicles, including a military jet that has crashed into a part of the building. The map is composed of two main boxed in parking lots connected by a hallway partially blockaded by destroyed cars, and a peninsular area in the southernmost part of the map.  In total there are ten barricades on the map.

The two boxed in areas in addition to the peninsular area are small and can be somewhat cramped. Though Airbase lacks the maneuverability of later maps, evading zombies is still more than feasible if a player keeps mostly to the larger areas and moves between them when they begin to become overrun. The partially blockaded hallway forces to movement in a zigzag pattern, allowing players to put more space in between him/her and the zombies (with the exception of Shadows). Because of its tight corners and open flanks, this zigzag hallway is the least recommended place to stick to.

An assortment of weapons would work best here. When zombies funnel through the zigzagged hallway, waiting on the other end with a shotgun would be optimal, since they're funneled into tight groups. Assault rifles are best used for killing zombies from medium ranges though they are still all around effective weapons on this map, but when traveling or running zombies in circles, pistols and submachine guns should be the weapons of choice. 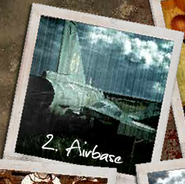 Picture of the Airbase, as seen in the map selection area.

The barrier in the PC version (see Minimap)
Community content is available under CC-BY-SA unless otherwise noted.
Advertisement