Heres the blogpost by Ninjakiwi.

I suggest playing one last time using the archive.

Can someone please rank for me weapons from best to worst? (all of weapons except assault,smg),thank you!

Ive seen several people upgrading pay grade and some of them are maxing it out.

Is pay grade not Worth adding skills?

Update is about something called 'Faction Wars' where if you grind up creds from the Faction Wars you get specific creds from a planet. Haven't update the game yet but I'll give yall info about it soon.

Here is a screenshot about the patch notes from The_Primo_Z 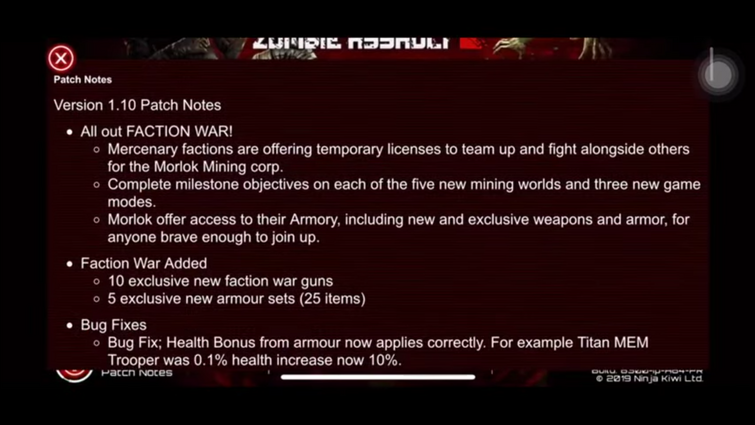 If you're looking to play the game then you've come to the right place! The game is basically dead and we're looking to keep the community in one place. Hackers are allowed to join but under certain rules. Ever since the server was created we've been uncontested in activity on the platform. We have active game chats and provide other content other than the game itself. Members have shown their support by boosting the server as well. On top of that the best players in the game are in it and constantly provide tips and tricks for the game in addition to boosts. Server is filled with guides from the general FaQ's to exploit help. So what are you waiting for? Come and join us!

I know I just posted a thread, but I also wanted to know, with some in depth info, what does anyone here think is the best build for me? For details, I want a build that can be able to withstand hits and stuff, and not die, and as well I wanna be able to kill things at a fast/decent speed. What class should I choose, and for whichever one chosen can you add a link to a build or skill set or make on here? ANY help would make me so happy!